I’m sure there is no need to remind you that Sunday 17th June is Father’s Day.

The date of the third Sunday of June is designated to celebrate fatherhood in many countries, such as the UK, USA, France, China, Ireland and Japan. The custom first began in the USA in 1908 and was adopted here after the Second World War. It is a day when ‘Father’ can be treated and recognised for his parenting skills and family support.

Although may I suggest we can all be treated around this week end as the 15th June is the beginning of National Picnic Week as well as being National British Beer Day, (which amusingly lasts until the 17th !!) and for those with a sweet tooth then 16th June is National Fudge Day. Lots of foodie celebrations. If you are not taking the man in your family on a picnic, with a bottle of beer and a packet of fudge then this recipe for a Father’s Day meal may ‘hit the spot’. These Chicken and Asparagus Parcels can be prepared in advance and take advantage of the asparagus season by wrapping the tasty green spears in a free range chicken fillet.

To achieve the perfect all over browning I use a shallow baking tray, the half size hard anodised AGA baking tray is perfect – it conducts heat well, hangs direct on the Roasting Oven runners and the shallow sides mean the enveloping heat of the cast iron reaches all parts of the ‘parcel’ and radiant heat does not dry out the meat. The parcels contain cream cheese which provides a creamy texture to the filling so I found I did not need an extra sauce – however I know that some people do like plenty of sauce and would suggest a simple cream (or crème fraiche) and wine (or brandy) sauce.

Lining the tray with Bake-O-Glide means washing up is easy, clean in hot soapy water or put the Bake-O-Glide in the dishwasher. Serve the parcels sliced to reveal the filling, accompanied by steamed minted Jersey Royals, new carrots and maybe some more of the asparagus spears. 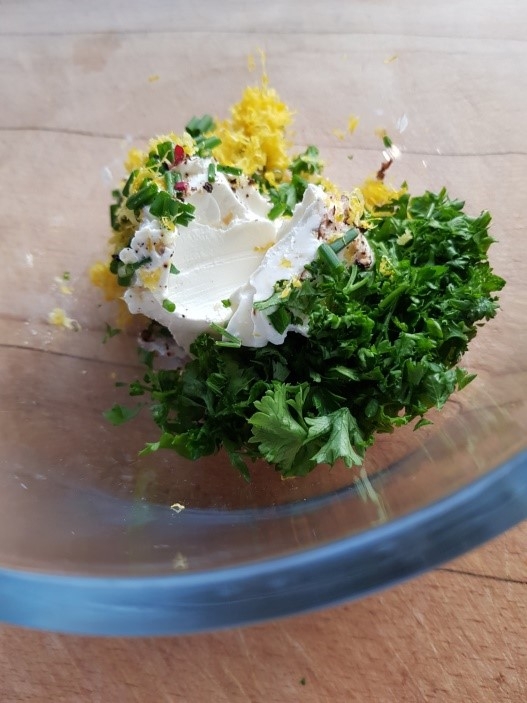 1 - Place the filling mixture in a bowl and combine. 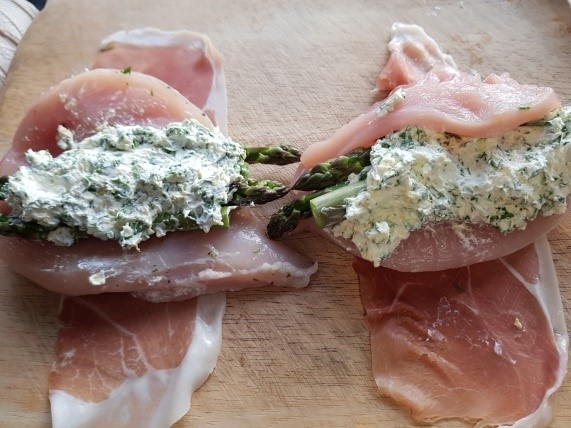 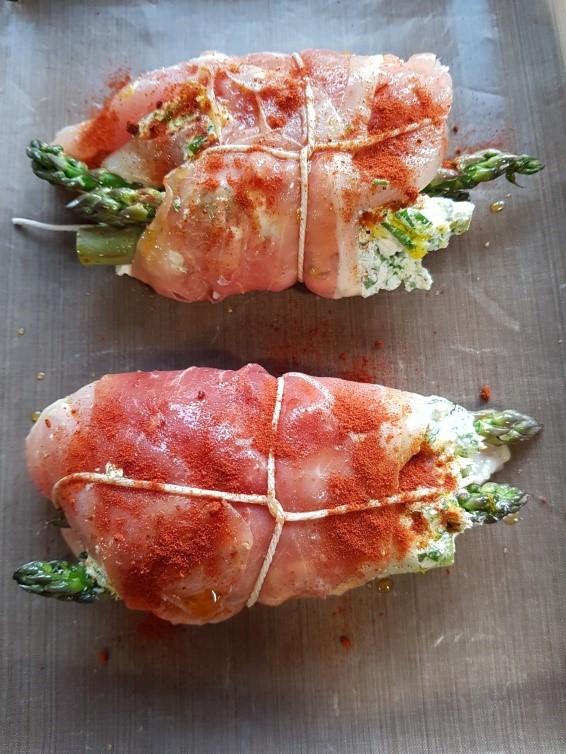 3 - Wrap in Parma ham and tie in parcels.

Cut each chicken fillet through the thickest part and open out, rather like a butterfly.
Make up the filling by mixing the cream cheese, lemon zest, garlic, chives, parsley, salt and pepper together.

Lay the asparagus spears onto each chicken fillet, ‘top to toe’ that is so one spear goes one way and the next the opposite, top with the filling. Fold the chicken over and place on a slice of Parma ham. Use a piece of string to tie up the parcel. Place on a hard anodised AGA baking tray, lined with Bake-O-Glide. Sprinkle with a little paprika, if liked.

2, 3, 4 and 5 oven AGA: Slide the baking tray on the third set of runners down in the Roasting Oven and cook for about 20 minutes or until the chicken is cooked through – rather depends upon the size of the fillet.

Remove from the oven and allow the chicken to rest for 5 minutes, remove the string, slice and arrange on a plate, alternatively for a more informal ‘sharing’ meal serve whole on a platter and let everyone tuck in!