Hints and tips for Marmalade making

Always put the hot marmalade into hot sterilised jars. The jars are easily sterilised in the AGA Warming or Simmering Oven – wash in hot soapy water and rinse (no need to dry) and place on a baking tray in the oven for 30 minutes to an hour, or until they are dry. Don’t forget to sterilise the lids too.

Use a large preserving pan, so the marmalade does not boil over when reaching setting point. The AGA Preserving Pan is 11 litres, excellent for total of 6.3kg of oranges, sugar and water (the pan can also be used for chutneys, jams and bulk quantities of casseroles). 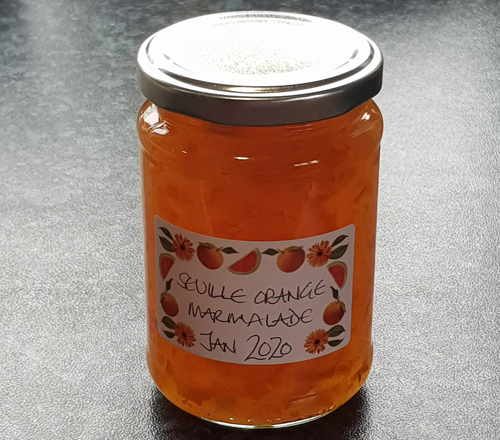 Once the fruit and water have come to the boil place in the Simmering Oven for 1-2 hours to soften the peel.

Measure out the sugar and place on the Warming Plate, or on a Chef’s Pad on the Simmering Plate, to warm. Warmed sugar dissolves quicker.

Waxed discs provide a seal for the tops of the hot marmalade jars, position shiny side down then put on a tight-fitting lid.

When the warmed sugar has been added to the simmered peel, stir to dissolve then place on the Boiling Plate for a vigorous rolling boil – the AGA Splash Shield saves splashing the lid liner.

The setting point of marmalade is around 105°C (220°F) use a jam thermometer to test, alternatively use the ‘wrinkle test’ – put a saucer in the refrigerator before bringing the marmalade to boiling point, when the marmalade reaches the point where you think it is ready remove the preserving pan from the heat, spoon a little marmalade onto the cold saucer. Leave it for 5 minutes then push the marmalade with your finger if it ‘wrinkles’ it is done, if not boil the marmalade for another 5 minutes and retest.

Leave the marmalade to rest for 10 minutes before placing into the jars to allow the peel to distribute evenly.

I find the easiest way to fill the jars (if you haven’t got a funnel) is to ladle the hot marmalade into a heatproof measuring jug then fill the jars from the jug.

Leave the marmalade to cool completely before placing labels onto the jars.

Marmalade is not just for toast!  Home-made marmalade is delicious in cakes, ice cream, sweet and savoury sauces too.